I am a Pink Pistol. 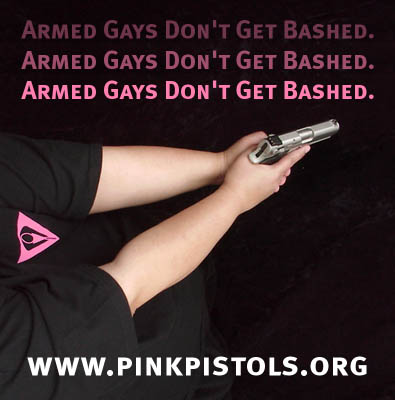 In light of two recent events, now we make the case for gays to be armed.

By now everyone’s heard of that horrific act of terrorism in Orlando, FL by a madman who swore allegiance to the terror group ISIL.  If there is a Hell, then may he rot there forevermore.

We address actress (and as it happens, also gay) Kelly McGillis’s recent decision to get her conceal and carry permit.  And given what she’s had to endure in her lifetime, I’m surprised it hasn’t happened sooner.  I’m sure glad it’s happened now, though.

As we Pink Pistols say, “pick on someone your own caliber.”  🙂

Finally, we bring you a li’l surprise, a nice ‘n’ juicy nugget from Katie Couric’s “Under The

Gun” interview with the VCDL.  Katie apparently thinks it’s somehow–oh, I dunno–“more OK”, I suppose–to face an attacker with a knife vs. a gun.  Apparently she’s never heard the old policeman’s adage:

I think Kelly McGillis would disagree with her, too.  I think we’re also starting to perhaps see why Katie got fired from CBS back in 2011.  Shoddy journalism can have that effect.

NOTE:  This episode is “Rated PG-13” for a small amount of “strong” language during the discussion of Ms. McGillis’s ordeal.